Here is a little story of how I met my childhood hero composer James Horner and film director Jean-Jacques Annaud.

Time flies! August 2019, the world is celebrating the making of the Beatles‘ iconic photo of the Abbey Road zebra crossing.

August 9th, 2011…. that is to say 8 years ago as I am writing this article… I attended for the first time of my life Abbey Road Studios for a BBC TV Series called The Body Farm starring Tara Fitzgerald and Keith Allen. The music was composed by Maurizio Malagnini and conducted by Jeff Atmajian. I was the orchestrator of this project.

Six episodes for a total of 12 sessions for probably 200 cues to orchestrate in few weeks. Jeff Atmajian orchestrated the beautiful “Main Title” composed by Maurizio and supervised the work on the 200+ cues I had to orchestrate. This was a scary amount of work! I was a fresh naive student from Conservatoire de Paris… and had NO EXPERIENCE in dealing with so many cues. During my orchestration studies, it took me one month to orchestrate 5 minutes of Debussy! Ah ah ah! Now I need to orchestrate at least 2 to 5 minutes per day to finish a project on time…

I met so many brilliant people that summer of 2011! Engineers like Jonathan Allen, Andrew Dudman, Sam Okell, Jake Jackson, Geoff Foster and Simon Rhodes! Musicians like Anthony Pleeth, Skaila Kanga, Dhafer Youssef, etc… I will always remember that Simon Rhodes popped up out of nowhere into our control room as he was very impressed by the sound / orchestration of the cue. Maurizio and I were proud and flattered :-p

During these sessions I met also two people I admire.

Jean-Jacques Annaud who was there for the recording sessions of BLACK GOLD. We talked a bit about Yo Yo Ma, Brad Pitt and … John Williams. He told me that he gave JW a book about composer Jules Massenet signed from TV host Ariane Massenet as JW loves this composer. I was surprised. Indeed… I would have said that JW loved Prokofiev or Stravinsky or Walton. But if we listen carefully to Massenet, there are the roots of the langage of Claude Debussy who was with Richard Wagner the guys that changed harmony and orchestration in new territories for decades to come!

The second person I admired and that I met that SAME day of August 9th, 2011 was…. James Horner! My childhood hero with John Williams was literally there at the Abbey Road Cafeteria.

I was mixing that day with the composer Maurizio Malagnini. It was going to be a very long day and I needed energy. Instead of taking the “healthy” fruit always offered in a basket in each Abbey Road studio, I had decided a little regression into childhood to get a chocolate bar. And then, bam! James Horner‘s on a coffee break too! I hasten to inform my friend Maurizio. To our great surprise, he agreed to take some of his time to talk with us, young musicians who were just starting out in the music business. He was very warm and kind. And most importantly, very cool. So relaxed. To the question “How do you manage to be so relaxed and calm in this crazy job, with twisted hours and long sleepless nights”, he replied: “Well, we make music every day to earn a living. Isn’t that the best job in the world? So be cool, everything will be fine. »

This is probably the day I discovered indirectly the concept of Ikigai.

That day there was also a fire alarm in Abbey Road. I met again Horner and Annaud as we all needed to go outside.

200 recording sessions later, thousands hours of studio time later, I remember and cherish this day very much! I met James Horner few times between 2011 and 2015. Mostly at the Cafeteria of Air Studios and Abbey Road. I was secretly hoping to orchestrate one day for him. Sadly, his sudden unexpected death made this dream impossible.

But Life continues. The moral of the story is this ikigai concept. Doing what we love as a job is one of the key to be happy! Because it is hard work!!! So it’s better to spend time on something we care about.

Wishing a nice summer to all!

​THANK YOU FOR ​READING THIS ARTICLE​

​As a ​BONUS GIFT, here is a one-page PDF that illustrates the various musical influences of JOHN WILLIAMS that you can explore and apply to your projects to improve your ​ARRANGING and ​ORCHESTRATION skills. ​Feel free to enter your information below to receive it 😉

​​I hate spams: your email won't be given or sold to anyone! By subscribing here, you will receive articles, videos, commercial offers, podcasts and free advice to help you in improving your skills in Music (Orchestration, Film Music, Jazz, Classical Music, Harmony, Music Analysis, Solfege, Sibelius, etc...) You can unsubscribe whenever you want!

​​HERE is your welcome gift! 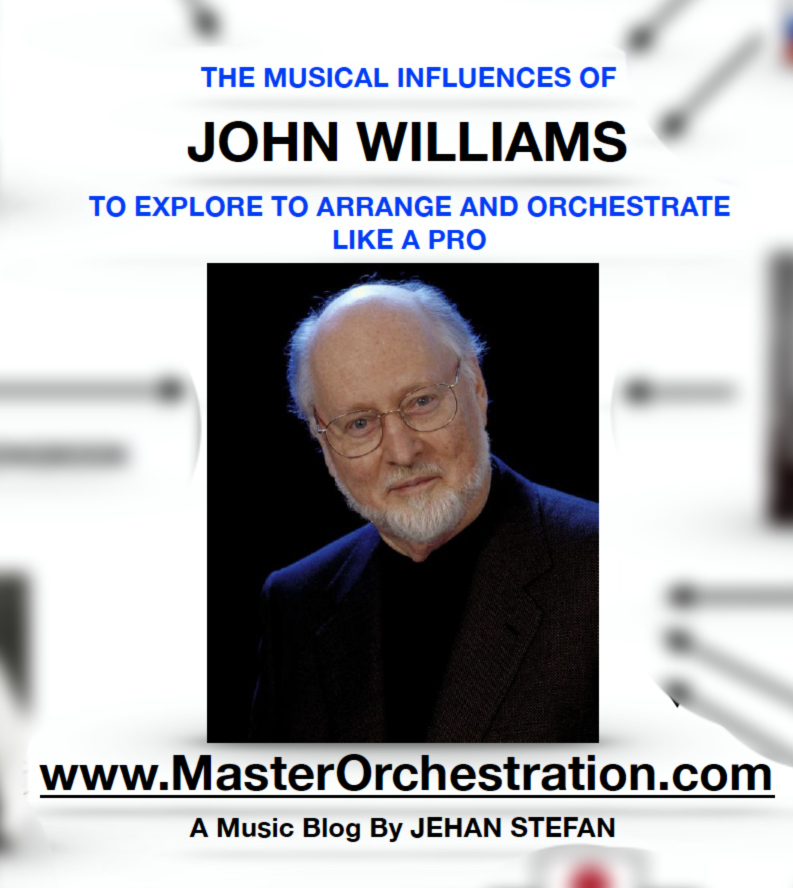 ​This is a one-page PDF describing the various musical influences of JOHN WILLIAMS to explore to ​ARRANGE and ​ORCHESTRATE like a PRO. Please, complete the information below to receive it ;-)

Please log in again. The login page will open in a new tab. After logging in you can close it and return to this page.

​You want to improve your skills in
ARRANGING and ORCHESTRATION?

​​Here is a MINDMAP

​showing the musical influences of

​a master of arranging and orchestration​,

the one and only JOHN WILLIAMS!

​Explore yourself these influences,

​one ​by one ​will give you

​powerful tools for YOUR music!

No thanks, ​I have just scored the latest Spielberg movie,

​Please, complete the information below to get your bonus

​​I hate spams: your email won't be given or sold to anyone! By subscribing here, you will receive articles, videos, commercial offers, podcasts and free advice to help you in improving your skills in Music (Orchestration, Film Music, Jazz, Classical Music, Harmony, Music Analysis, Solfege, Sibelius, etc...) You can unsubscribe whenever you want!